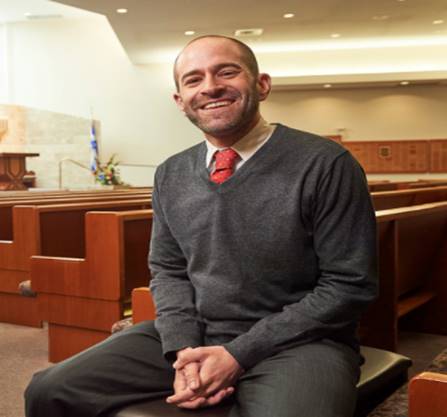 Benjamin David is the senior rabbi at Adath Emanu-El in Mt Laurel, New Jersey. He is a respected teacher, writer, and leader within the Reform Movement.

The son of Rabbi Jerome and Peggy David, Rabbi David was born in Philadelphia and grew up in Cherry Hill, New Jersey. He graduated Phi Beta Kappa from Muhlenberg College in 1999 before enrolling in the Hebrew Union-College Jewish Institute of Religion. As a rabbinic student, he taught widely, and worked with students of all ages at Shaaray Tefila of Manhattan, the 92nd Street Y, the Jewish Guild for the Blind, and Temple Beth Am of Monessen. As a student he won multiple awards in the fields of midrash and Talmud and co-founded a literary review, Davar Aher. He was ordained from the New York campus of HUC-JIR in 2004.

Following ordination he served for seven years as the associate rabbi at Temple Sinai of Roslyn in New York, where he worked closely with synagogue youth and on such causes as Israel, social action, and community organizing.

Rabbi David is deeply committed to URJ Camp Harlam, where he spent time as a camper, counselor, and supervisor. He now serves each summer on the rabbinic faculty.

A competitive runner, he has run 18 marathons, including the Boston Marathon twice and the New York City Marathon four times. He is also a co-founder of the Running Rabbis, which brings clergy together to run and walk in the name of shared causes.

As a cancer survivor, he works with cancer patients and their families and is active both locally and nationally in the Leukemia and Lymphoma Society.

His wife, Lisa, a fellow Camp Harlam alum, is the director of Camp Harlam. They are the proud parents of Noa, Elijah, and Samuel.